Amateur twinks site (Young Straight Boys .com) looking for ways to promote it (and being new to this forum)

(It’s my first post so please excuse me if it’s not well written. I’ve read the rules.)

I’ve been running YoungStraightBoys.com since its creation, in 2002.
It’s a one-person thing. I do everything: scouting, photo-video sessions (including “helping hand”…), publishing, and trying to have a rather decent preview area with WordPress.
I almost don’t do any promotion, simply because I’m extremely bad at such things.
However, I try to improve “SEO” a little bit, through Yoast (and recently Squirly - complicated).

The goal of this post is to find ways to promote it, in other words, traffic.

There is an affiliate program with Verotel (with a link to it at the bottom of the pages).
(I installed CCBill as well, recently, because I have suspicions about Verotel because there are many declines, but CCBill forces to pay a 500$ yearly “Visa fee” (which they did not say at first), which is definitely impossible for me, as it represents one month of revenue (on average). So if you want to resell as an affiliate, don’t worry about CCbill, there are almost no sales. Or I can install their affiliation program but since I asked them to remove Visa option, now there are no sales at all with CCBill. Anyway there is only one transaction per day, on average…)
(Btw. thanks a lot to GayDemon as an affiliate, because he brings me a lot of new sales

and this helps to survive, literally.)

About the content, well, I guess that many people don’t like my content, for many reasons, such as the lack of “hardcore” action, and the average or even poor image quality.
But, IMO, here is not the problem, and I won’t change it, because I cannot change 18 years of “old content” which still deserves to “convert”, and simply because this is the style of the site, this is the “niche”.
I can assure you that there are people (including me as the first one) who really like such content, and who are delighted to find it, because they can’t find it anywhere else (although there seems to be rather “recent” sites doing similar things (with the same ages, 18-22), i.e. “gay for pay” or “hunting straight boys” etc., but they are much more “pro” than what I do…).
So, in other words, I just try to stick to “the real thing”, and to provide an experience very close to reality, with “average boys”, definitely not actors, who have no clue about these things and who accept to give a try only because they need cash.
This means that the viewer can probably make an unconscious link with some boys that he has already seen in a shop, in transportation, without ever daring approaching him.
I try to “solve” that problem, “by proxy”, and to make the “magic” happen, since in theory it’s impossible to do all these things with real straight boys (like most of “my” boys are).
So that’s the “spirit” of the site, and it explains why it’s not so important if it does not look so professional in terms of image quality or even design, although of course it’s important to look trustworthy (people don’t want rip-offs, and for that, I provide a way to “sneak peak” very deeply inside the members area without password, I don’t know if it is a very good area, but at least the visitors should understand very easily what they will get exactly. And of course the other purpose is to arouse them better).

About content quality, I agree that when the camera is shaking too much, it’s definitely bad. It took me years to understand that, really too many years, but now in the new sessions I’m recording (which have never been released), I pay attention to that. It seems impossible to correct the old clips because it is “too much” and anyway I don’t have the time to re-process the original clips.

About the site design, probably you will find that it’s amateur, but it’s the result of a lot of work : it was much much worse in the past… The site was purely static html from 2002 til 2013, which was stupid, but fortunately a nice gay adult webmaster convinced me to switch to WP, and also to add a rotating script in the members area, Awiz, which I find very good and which never failed since then (8 years). I mean that it has been rotating the sets uninterruptedly for 8 years now, without stopping… (I’m in good relations now with them, in case someone here is interested to use it, maybe I can help).

So now the big problem is promotion (traffic)…

I’m sure that the site “converts” not so bad, and even very well with
the people who like such a content. But if no one gets to know the
site, it’s like opening a shop in the middle of the desert…

Here is the story… Sorry about writing so long…

Any advice (or affiliation, of course) is welcome.
However, for now, I will hardly modify the site design, because I
already spent a lot of time on that recently, and I’m exhausted. For
sure, improving the design is always better, but anyway it “sells”
even like it is now.

Thank you very much for reading and , I hope, for answering…
Thanks.

P.S. (more details, in case you are curious)

The “good old times” were (for me) until 2008…
My sites were showing on the first page of Google for “teenboys”.
Then, there has been a “Panda update” at Google, and all disappeared. Overnight.
At least, that’s what I understood.
Then I entered in some sort of survival mode.
And between 2013 and recently, I had other issues (not legal ones but more personal ones) but at the same time I found a sustainable way of living, and I did not care about the site, that I kept because it was bringing some extra money (like 1000 $ per year), but because of all the free tube sites (which IMO killed the “industry”) and all the content stealing, I just thought that it was not worth anymore working on it.
That’s why I wrote that Awiz worked so nicely, because there has been some years where I checked the site and emails only 2 or 3 times… Per year.
But now it is “per day, at least”, because things changed in my situation and now I have only that for a living.
So after a lot of improvements, and some attempt to reach “old customers” (when they are not dead…) with mailings (highly difficult…), I could multiply the revenue by 3, 4, 5… (meaning at least 300 $ per month), which allows to survive.
But I’m sure that it can sell much much more. There is almost no traffic currently.
The key is the traffic, but I cannot do it (too long story to explain…). One cannot do all, there are specialists in each field. My specialty is to find “unsuspecting” cute teen boys, and to manage to get them finally nude and much more. Which is not so easy, but I found my way for “convincing” slowly.
Website design is not my area (although maybe it’s decent for a non-pro), and anything about “promotion” is really out of my possibilities. I had some sort of “free promo” by Google (I don’t even know how, since I did not do any SEO effort) until 2008, that’s all.
That’s why there is the affiliation system.
Thanks for reading.

Welcome to the forum, thanks for joining.

You did include a lot of information here. But for those who might not read it all, check out his site. It’s got some very interesting content.

Thank you very much, yes I wrote a lot, it’s long to read, and “an image is worth 1000 words” so it can be interesting to have a look on my site YoungStraightBoys .com and probably more interesting to know that there is an affiliation program with Verotel (link at bottom of pages).
Thanks a lot

The content does look interesting but I think the title of the website would scare most affiliates away from promoting it or sending traffic to it, at least in the US. You might want to consider rebranding the site without the words “young” and “boys” in the domain title which to most people implies that they are not of legal age.

Hello and thanks for the consideration and the advices.

Yes, if I had new that problem when I registered the domain 20 years ago, I would’t have used the word “young”.

I can replace “young” by another word that I found, but anyway I cannot redo all the watermarks on all the pictures and videos, it would take ages.

So…
I don’t know…
Maybe I can do a copy of the current preview site (youngstraightboys dot com) with the new domain, it’s easy with WordPress, but maybe it can make problems with Google…
Regarding the promotion links (with Verotel) I can create a new one directing to the new site…

Unfortunately I have no idea on how to handle that. Changing domain name will have an affect on your Google ranking for sure but how much depends on how such a move would be done.

But here as a big issue which won’t help you attract traffic from affiliates: 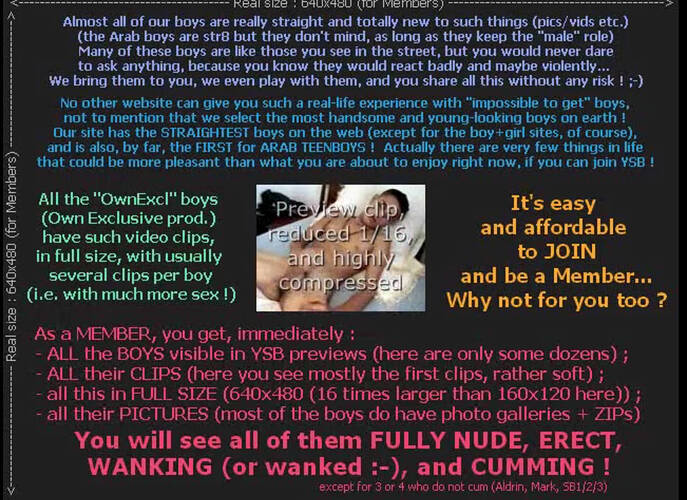 Hello and thanks, yes these old video previews are not good, but recently I made other preview clips.
Do you advise me to remove these old clips for the promotion zip, and the put the new clips instead ? (they are for different boys)

By “distorted” photos, you mean the photos with blur or censorship, that’s it ?
Yes sure I can provide many non-nude pictures, given that a big part of the content is with underwear. I did not think that it can attract or convert people nowadays, but maybe ?

Sent you email. And yes, I would replace old trailers with new ones

The content looks interesting, although it does remind me of Miami Boys. The look of the site is very 1990… Apart from the name of the site (lots of red flags) the appearance is poor, and that is very important. If you look at what your competition looks like you are a million miles away. Sorry to sound negative.

Hello and thanks, yes I know that the design is not the best, but I’ve worked a lot to reach this result (the site was only static HTML during 11 years) and I’m exhausted (and it cost me money also to pay someone for some scripts), so it is simply impossible for me to spend again months or years to try and improve it again, although I do little corrections everyday.

That is why I explained initially that there is no project to change the design.
I just want more promotion, that’s all.

Even with the current (“terrible”) design it converts very well, maybe around 1:50.
So with more visits there would be more sales, it’s so simple.

And given that the site is still not very well known, then the affiliates could earn money easily.
(A few of them are doing that.)

Now if a ratio of 1:50 is still not good enough, and the important affiliates want to promote something more “normal” or less something or more modern etc, of course they are free.

I prefer a basic design and basic video quality (I cannot improve the rushes) and genuine content, than a very nice marketing but poor content, I mean very usual things, seen millions of times, with professional actors.
My users think the same, so the goal is simply to find more of these customers who like that type of things.
Btw. the users rarely complain about the site design, it is sufficient for what they want, they are interested by the boys